Joseph Alois Schumpeter (1883 –1950) Austrian political economist. He emigrated to the  United States in 1932 to become a professor at Harvard University, where he remained until the end of his career. He was one of the most influential economists of the early 20th century and has been credited for popularizing the term "Creative destruction". 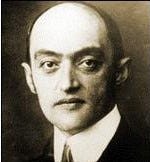