The plane traveled 120 ft (36.6 m) in 12 seconds at 10:35 a.m. at Kitty Hawk, North Carolina. Orville Wright was at the controls, lying prone on the lower wing with his hips in the cradle which operated the wing-warping mechanism. Wilbur Wright ran alongside to balance the plane, and just released his hold on the forward upright of the right wing in the photo. The starting rail, the wing-rest, a coil box, and other items needed for flight preparation are visible behind the machine. This was considered "the first sustained and controlled heavier-than-air, powered flight" 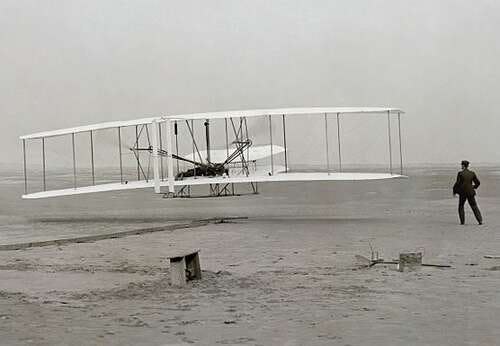