Anthony de Mello, also known as Tony de Mello (1931– 987), was a Jesuit priest and psychotherapist born in Bombay, India. A spiritual teacher, writer, and public speaker. He wrote several books on spirituality and hosted numerous spiritual retreats and conferences. He is known for his storytelling which drew from the various mystical traditions of both East and West and for introducing many people in the West to mindfulness-based practices he sometimes called "awareness prayer"
Quote source: "Awakening - Conversations with the Masters" - Wikipedia 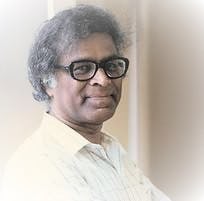