The Goldilocks zone is the habitable zone around a star where it's not too hot and not too cold for liquid water to exist on the surface of orbiting planets. This intriguing infographic includes relative sizes of those zones for yellow G stars like the Sun, along with orange K dwarf stars and red M dwarf stars, both cooler and fainter than the Sun. M stars (top) have small, close-in Goldilocks zones. They are also seen to live long (100 billion years or so) and are very abundant, making up about 73 percent of the stars in the Milky Way. Still, they have very active magnetic fields and may produce too much radiation harmful to life, with an estimated X-ray irradiance 400 times the quiet Sun. Sun-like G stars (bottom) have large Goldilocks zones and are relatively calm, with low amounts of harmful radiation. But they only account for 6 percent of Milky Way stars and are much shorter lived. In the search for habitable planets, K dwarf stars could be just right, though. Not too rare they have 40 billion year lifetimes, much longer than the Sun. With a relatively wide habitable zone they produce only modest amounts of harmful radiation. These Goldilocks stars account for about 13 percent of the stars of the Milky Way. 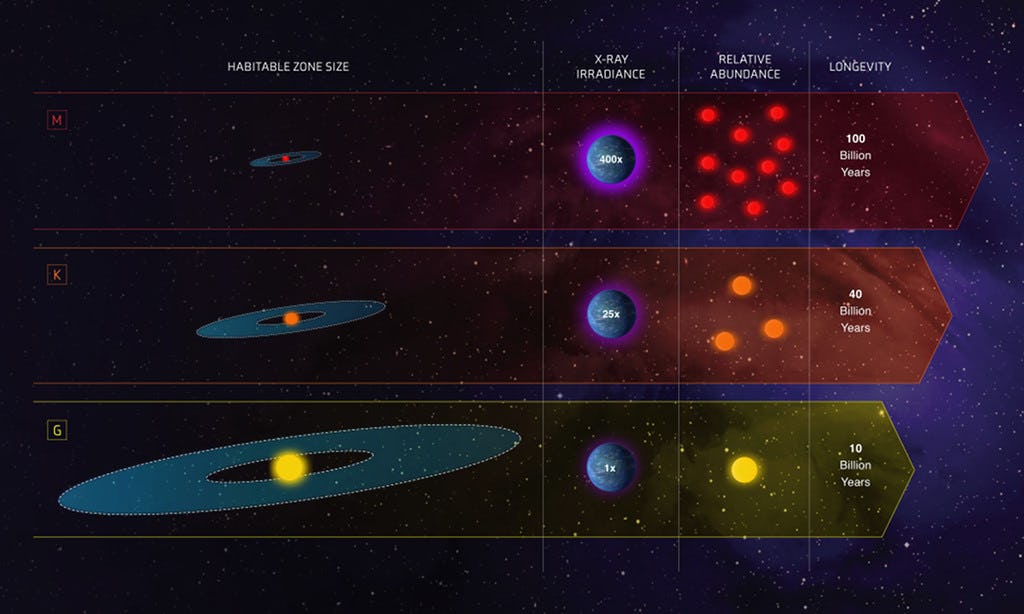