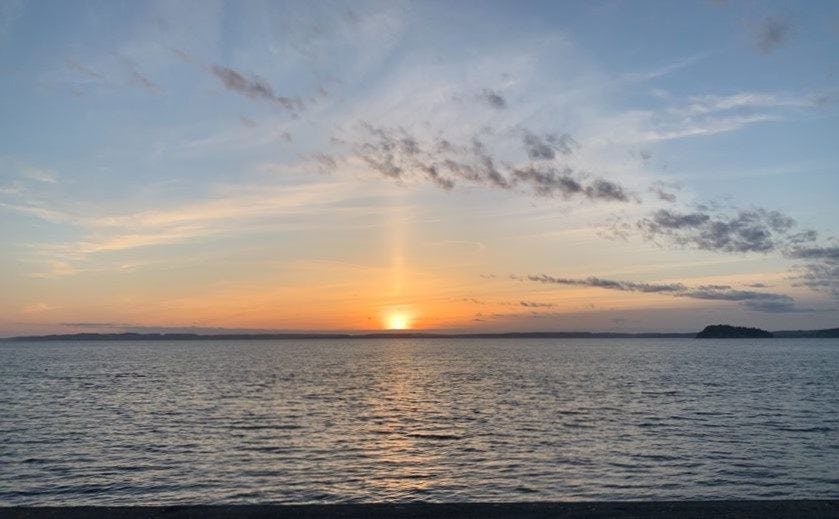 The Gum Nebula is so large and close it is actually hard to see. This interstellar expanse of glowing hydrogen gas frequently evades notice because it spans 35 degrees -- over 70 full Moons -- while much of it is quite dim. This featured spectacular 90-degree wide mosaic, however, was designed to be both wide and deep enough to bring up the Gum -- visible in red on the right. The image was acquired late last year with both the foreground -- including Haba Snow Mountain -- and the background -- including the Milky Way's central band -- captured by the same camera and from the same location in Shangri-La, Yunnan, China. The Gum Nebula is so close that we are only about 450 light-years from the front edge, while about 1,500 light-years from the back edge. Named for a cosmic cloud hunter, Australian astronomer Colin Stanley Gum (1924-1960), the origin of this complex nebula is still being debated. A leading theory for the origin of the Gum Nebula is that it is the remnant of a million year-old supernova explosion, while a competing theory holds that the Gum is a molecular cloud shaped over eons by multiple supernovas and the outflowing winds of several massive stars. 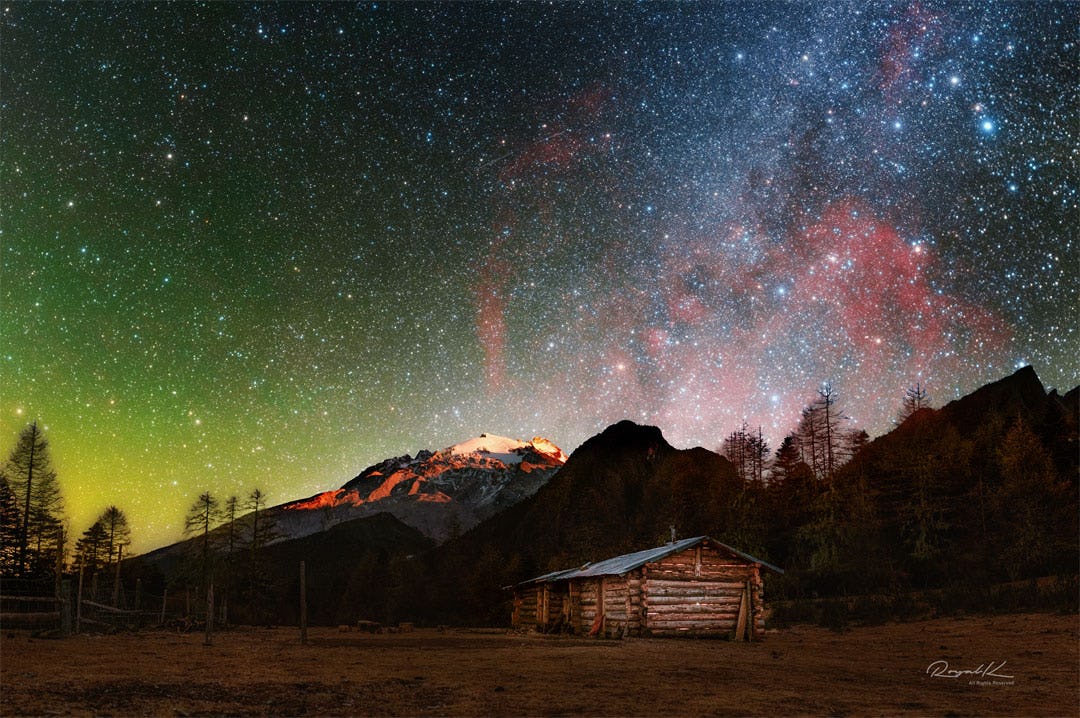 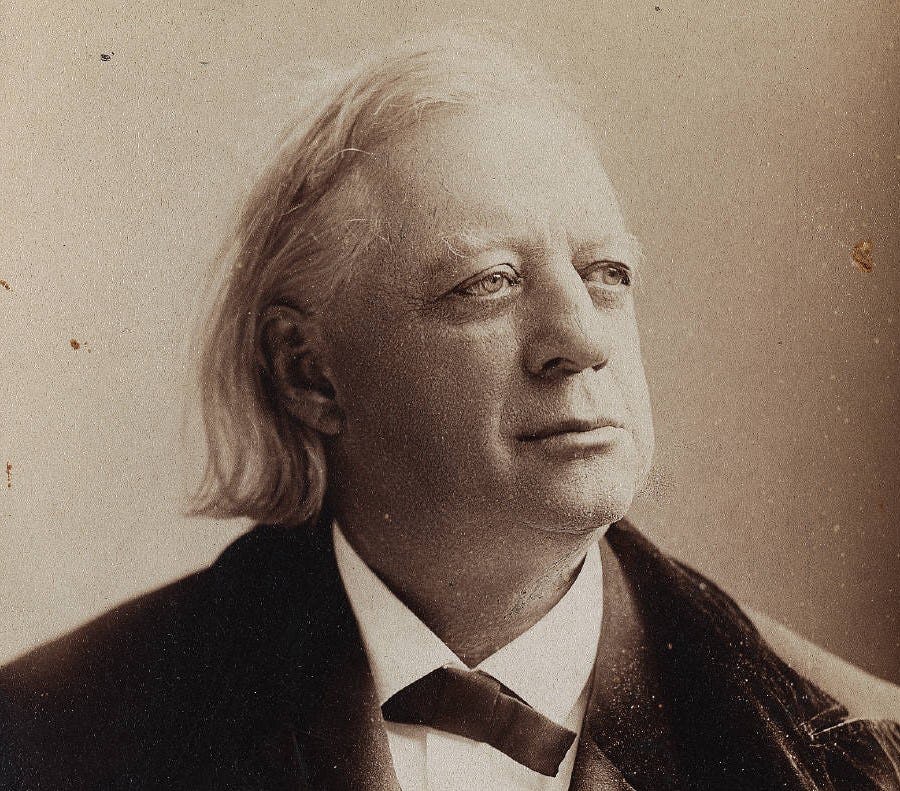 A
gathering
of clouds,
pressed
against
the
mountain.
Pressure
building,
as the
weather,
from below
pressed into
the steepness,
creating
a large,
Thundercloud.

He was described
as someone,'
who was everywhere.
His manner was kind,
all seeing and knowing,
truly a ubiquitous man.

What caused this outburst of V838 Mon? For reasons unknown, star V838 Mon's outer surface suddenly greatly expanded with the result that it became one of the brighter stars in the Milky Way Galaxy in early 2002. Then, just as suddenly, it shrunk and faded. A stellar flash like this had never been seen before -- supernovas and novas expel matter out into space. Although the V838 Mon flash appears to expel material into space, what is seen in the featured image from the Hubble Space Telescope is actually an outwardly expanding light echo of the original flash. In a light echo, light from the flash is reflected by successively more distant surfaces in the complex array of ambient interstellar dust that already surrounded the star. V838 Mon lies about 20,000 light years away toward the constellation of the unicorn (Monoceros), while the light echo above spans about six light years in diameter. 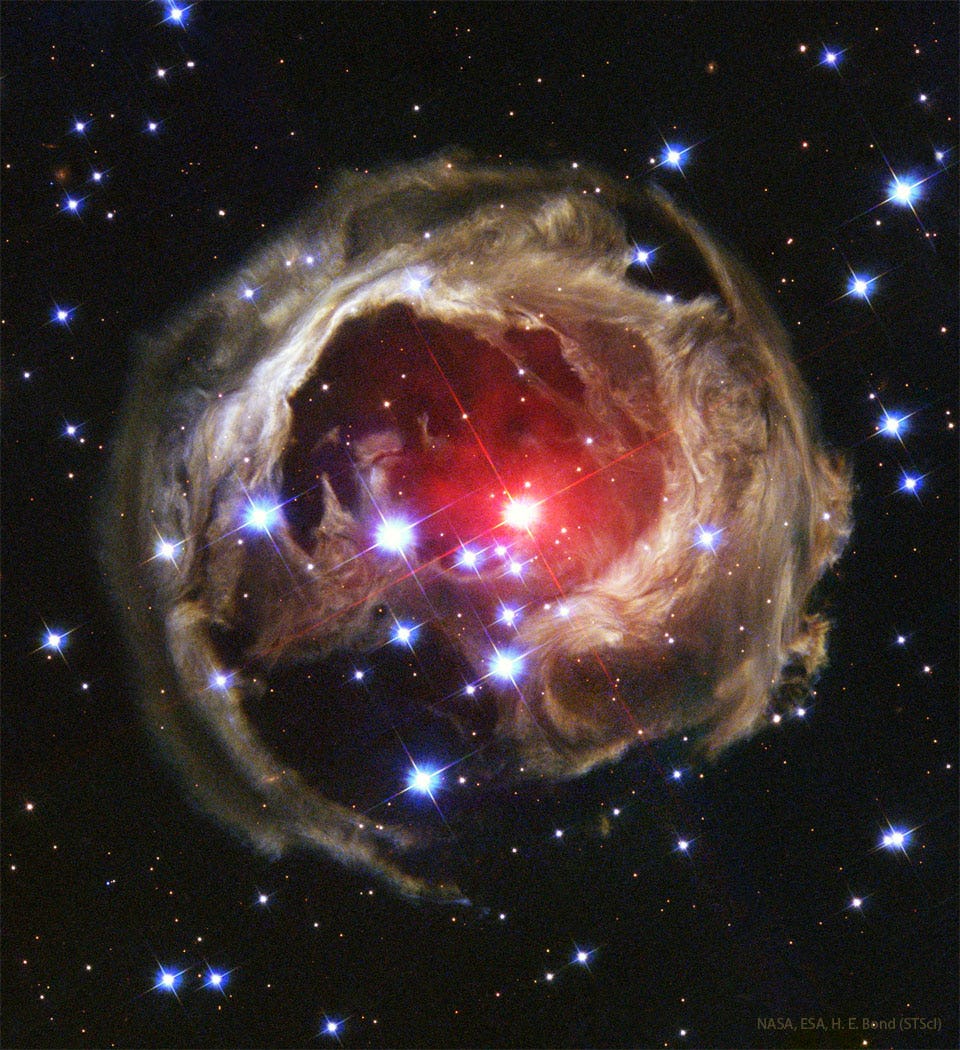 The Demons of life,
surround us.
Providing untruths,
because of anger.
What happened
to "I'll always
be there to
support you."?
Character assassination,
with threats without
the benefit of
an explanation
for a poor
choice of words.
My way or the
highway, approach
is totally inadequate
to the error.
Childish behavior
is not needed by
anyone; friend
or enemy.

Simultaneous images from four cameras were combined to construct this atmospheric predawn skyscape. The cooperative astro-panorama captures all the planets of the Solar System, just before sunrise on June 24. That foggy morning found innermost planet Mercury close to the horizon but just visible against the twilight, below and left of brilliant Venus. Along with the waning crescent Moon, the other bright naked-eye planets, Mars, Jupiter, and Saturn lie near the ecliptic, arcing up and to the right across the wide field of view. Binoculars would have been required to spot the much fainter planets Uranus and Neptune, though they also were along the ecliptic in the sky. In the foreground are excavations at an ancient Roman villa near Marina di San Nicola, Italy, planet Earth. 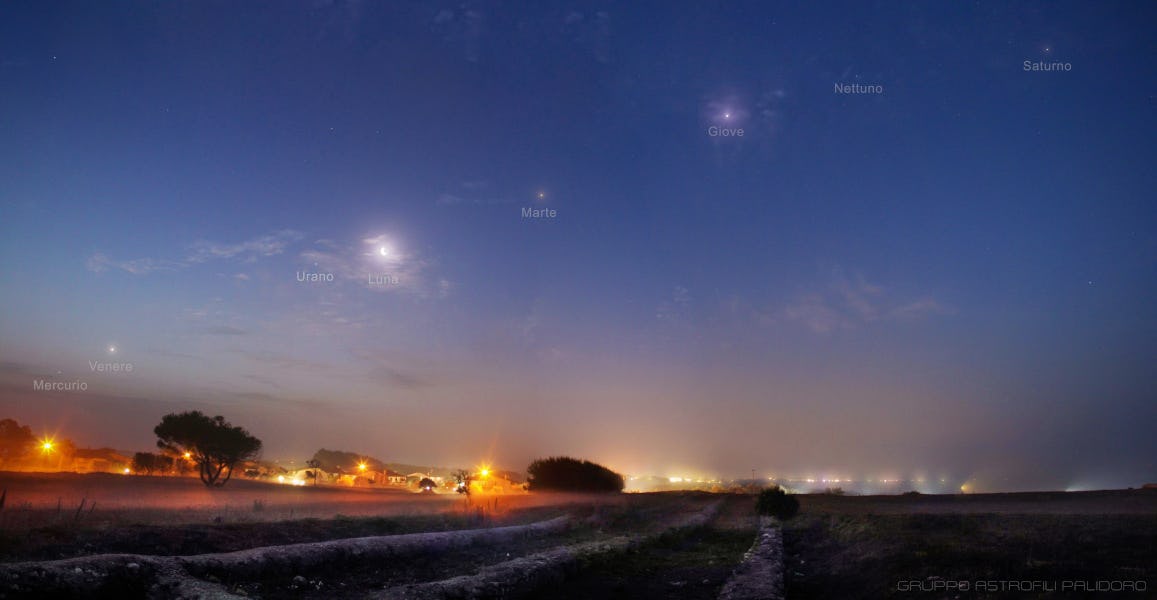 I'll find you on the morrow,
No matter where you may be.
For your love is my strength
as is my love for thee.

The heat from our love
forged a trust in my heart.
The strength is still here,
but not the memory part.
Daily I worry about
our life yet to be.
I miss this fine woman,
who I'll simply call She.

Willow trees, draping
with trailing branches.
Will of the Wisp
running alone.
"Where do you go?"
said Willow the tree.
"Can you please spend
the evening with me?"
Dark is the Moss,
in the trees shade.
A cool retreat,
all Nature made.

A solar filament is an enormous stream of incandescent plasma suspended above the active surface of the Sun by looping magnetic fields. Seen against the solar disk it looks dark only because it's a little cooler, and so slightly dimmer, than the solar photosphere. Suspended above the solar limb the same structure looks bright when viewed against the blackness of space and is called a solar prominence. A filaprom would be both of course, a stream of magnetized plasma that crosses in front of the solar disk and extends beyond the Sun's edge. In this hydrogen-alpha close-up of the Sun captured on June 22, active region AR3038 is near the center of the frame. Active region AR3032 is seen at the far right, close to the Sun's western limb. As AR3032 is carried by rotation toward the Sun's visible edge, what was once a giant filament above it is now partly seen as a prominence, How big is AR3032's filaprom? For scale planet Earth is shown near the top right corner. 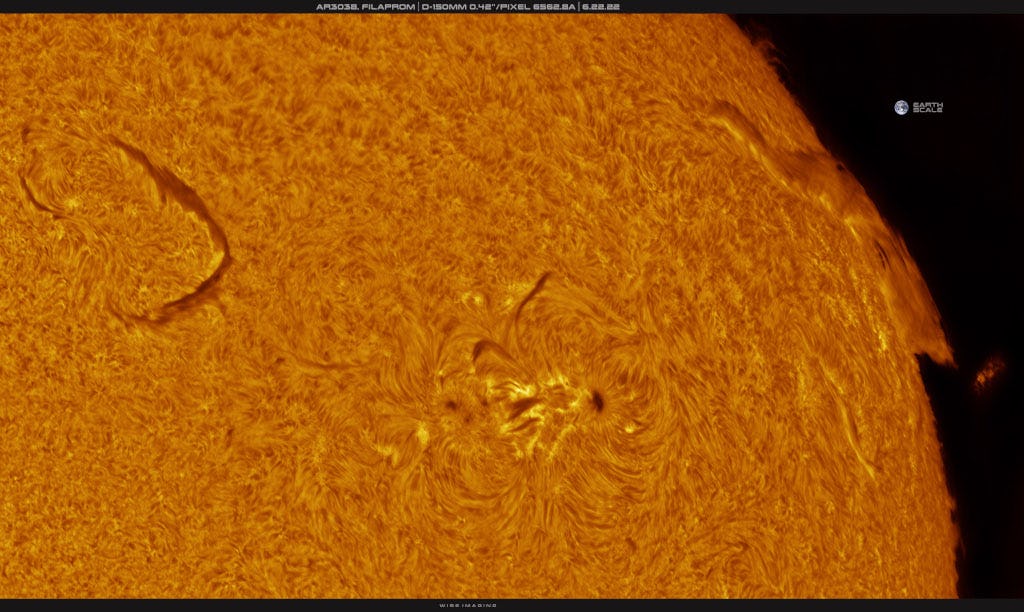