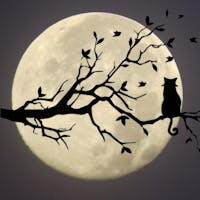 Only a night from old to new!
Only a night, and so much wrought!
The Old Year's heart all weary grew,
But said: "The New Year rest has brought."
The Old Year's hopes its heart laid down,
As in a grave; but, trusting, said:
"The blossoms of the New Year's crown
Bloom from the ashes of the dead."
The Old Year's heart was full of greed;
With selfishness it longed and ached,
And cried: "I have not half I need.
My thirst is bitter and unslaked.
But to the New Year's generous hand
All gifts in plenty shall return;
True love it shall understand;
By all my failures it shall learn.
I have been reckless; it shall be
Quiet and calm and pure of life.
I was a slave; it shall go free,
And find sweet peace where I leave strife."
Only a night from old to new!
Never a night such changes brought.
The Old Year had its work to do;
No New Year miracles are wrought.

Always a night from old to new!
Night and the healing balm of sleep!
Each morn is New Year's morn come true,
Morn of a festival to keep.
All nights are sacred nights to make
Confession and resolve and prayer;
All days are sacred days to wake
New gladness in the sunny air.
Only a night from old to new;
Only a sleep from night to morn.
The new is but the old come true;
Each sunrise sees a new year born.

Helen Hunt Jackson - (1830 – 1885) Pen name, H.H.; born Helen Maria Fiske; was an American poet and writer who became an activist on behalf of improved treatment of Native Americans by the United States government. She described the adverse effects of government actions in her history A Century of Dishonor (1881). Her novel Ramona (1884) dramatized the federal government's mistreatment of Native Americans in Southern California after the Mexican–American War and attracted considerable attention to her cause. Commercially popular, it was estimated to have been reprinted 300 times. The novel was so popular that it attracted many tourists to Southern California who wanted to see places from the book....Wikipedia