Asher Brown Durand (1796 -1886) was an American Engraver and painter of the Hudson River School. His reputation as one of the country's finest engravers was established with his 1823 engraving of John Trumbull's "Declaration of Independence". His bank notes engravings were used as the portraits for America's first postage stamps.

His main interest changed to oil painting about 1830 concentrating on landscape painting. He spent summers sketching in the Catskills, Adirondacks, and the White Mountains of New Hampshire, making hundreds of drawings and oil sketches that were later incorporated into finished academy pieces which helped to define the Hudson River School. He was an advocate for drawing directly from nature with as much realism as possible. Durand wrote, "Let [the artist] scrupulously accept whatever [nature] presents him until he shall, in a degree, have become intimate with her infinity... never let him profane her sacredness by a willful departure from truth."
Biographical source: Wikipedia 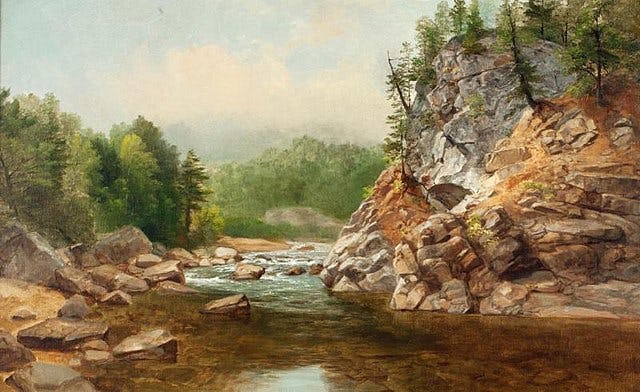