Francis Scott Key, an American Lawyer and amateur poet from Maryland, was being held aboard a British ship trying to work out a prisoner release when he observed the British bombardment of Fort McHenry in 1814.
He was inspired upon seeing the American flag still flying over the fort at dawn and wrote the poem titled. "Defence of Fort M'Henry" it was published within a week with the suggested tune of the popular song "To Anacreon in Heaven" written by John Stafford Smith for the Anacreontic Society a popular gentlemen's club of amateur musicians in London. It slowly gained in popularity as an unofficial anthem, finally achieving official status more than a century later under President Herbert Hoover as the national anthem. The national motto "In God We Trust" from a line in the Poem. Although the poem has four Stanzas, only the first is commonly sung today.

The poem was set to the tune of a popular British song  "To Anacreon in Heaven written by John Stafford Smith for the Anacreonic Society, a men's social club in London which with various lyrics, was already popular in the United States. This setting, renamed "The Star-Spangled Banner", soon became a well-known U.S. patriotic song. With a range of 19 semitones, it is known for being very difficult to sing.

Francis Scott Key went on to become District Attorney for the District of Columbia  after being nominated by President Andrew Jackson.
The photo of "The Star-Spangled Banner" handwritten manuscript by Francis Scott Key, 1814 is from the Special Collections Department/Maryland Historical Society. 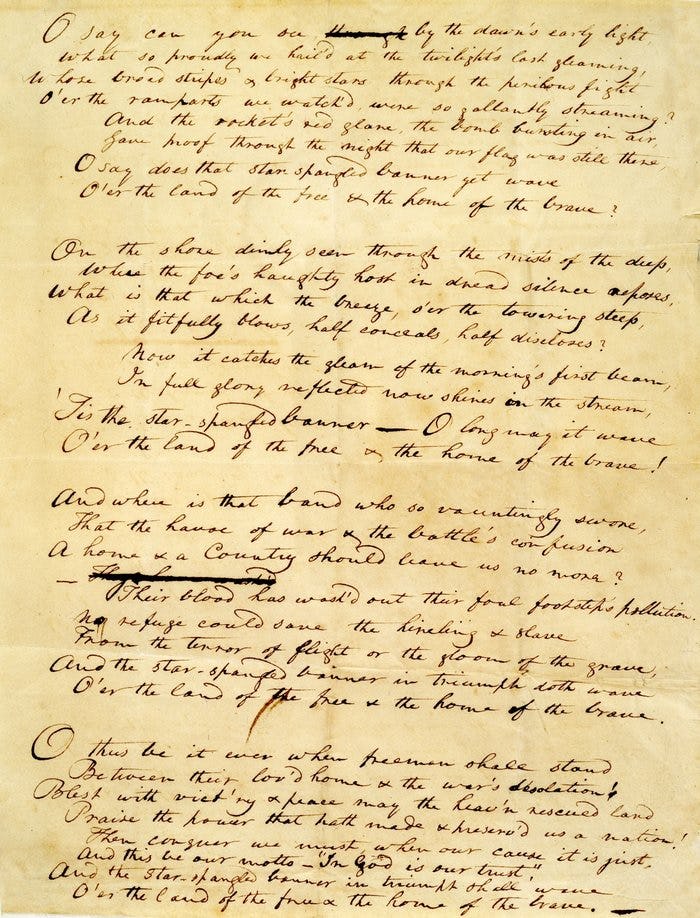