You can read more Skeeter Daddle Diaries at www.skeeterdaddle.net

I got a buddy who claims he was the first Owner-Builder on Camano Island. The year was 1977, the same year I bought my shack. I met him 13 years later and we ended up building 3 sailboats together, one for each of us and one for his pal the building inspector who became my friend too. Ironically, I may be one of the last Owner-Builders in Island County. I don’t think my permit was ever signed off on so I may well be the last official O-B.

I guess maybe they figured the codes got too complex for us amateur housebuilders, all those R-factors for insulation and E-glass in fenestrations and X-factors for our marriages. Or maybe it was this: a permit for an Owner-Builder was next to nothing, something like $50 when I got ours. The county might’ve done the taX-factor and realized us hippies were costing them revenue. Maybe some of us built our own palaces to save the permit expense, but I would’ve paid full freight just for the right to build my own place the way I wanted. A few hundred bucks wasn’t gonna stop me.

I spoze we can still build our own Xanadu, nothing to stop us. Just have to disclose that a rank amateur threw the hammer and ran the saw, flashed the windows, shingled the roof, installed the electric and plumbing and if you’re the prospective buyer, best beware!!! The people at the county sheds told me I’d be a Total Idiot to apply for an Owner-Builder status. Boy, he read me like a book. A comic book, I’d bet.

By the time I got our permit, us Owner-Builders had to meet the same codes as any fly-by-night contractor, go through the same inspections, all the rigamarole as the Big Boyz. In other words, the government here doesn’t allow for hippie shacks or slam-bang cabins. We got to build our parents’ suburban homes. Might explain why kids just stay with their folks now — why bother building the same damn place twice?
http://www.skeeterdaddle.net/

In Finland this week the fjord-folks are lining up to obtain the tax records of their friends and co-workers. The government makes these documents available to any and all, apparently in an attempt to keep the income disparities we have here in the Yew Ess Aye from growing too large in their wintry environment, I guess by letting everyone know that the guy in the next cubicle makes more than they do for the same or similar work. Might be a good idea. Might shame employers who pay men more than women or whites more than people of color. Probably won’t shame hedge fund managers or CEO’s. Shame is not part of their lexicon.

But then … maybe it just makes us South Enders crazy with envy for those who worked for Boeing or Weyerhauser, Microsoft or Google, made quick fortunes and retired with golden parachutes. I seriously doubt we need financial disclosure statements of those neighbors behind gated fences. What is worrisome, at least for me, is the potential for just saying to hell with the whole system, why work for measley wages when the millionaire across the ravine is traveling full time in Asia, New Zealand, Costa Rica and Paris? A few years back my UPS driver, who had a shack up in the foothills, told me, when I mentioned my brother worked for Big Brown too and made pretty good money, that he only worked for ‘wages’. I asked what he meant, ‘only work for wages’?

“I deliver to all these dot.com retirees who made a fortune,” he said. “I just make wages.” I said I think I’d look at it a little bit different. You got a nice place up in the hills, got a decent job at a decent wage, why not be happy with that? He shook his head sadly and muttered that it was hard when half his deliveries went to folks who retired at 45, got a whopping pension and stock options, and now they sit back with the life of Riley while he has to work his ass off to make ends meet.

I told him again I’d rethink that if I were him. I said I don’t make squat but I don’t have fantasies of being rich either. Poverty won’t buy you happiness, but it won’t deprive you of it either. He didn’t think that was funny or cute and he left shaking his head, no doubt driving off to the next mansion past my shack, maybe stopping at Tyee Store to buy a lottery ticket before delivering a gold plated mailbox to my neighbor.

I don’t care what folks make. I don’t care if my own mailbox is bent and the flag isn’t gold. I do think we have too low a minimum wage and we have too many rich people taking more than their fair share. But this is America. Money talks and the poor can take a backseat or hitchhike. But some of us aren’t poor, not really, and maybe we should enjoy what riches we have. Instead of envying the wealthy.

The slab showed up unannounced, a 4 foot by 4 foot concrete square sitting at the edge of the little park I caretake, a mystery to me. Maybe the county had decided to bring in artwork, who knows, maybe a commemorative sculpture of me, Ranger Daddle. I know, not too likely given the fact the county may not know the park even exists or if they do, who is doing the maintenance. But a mystery, like winning the Lottery, is mostly about firing our greedy imaginations.

A week went by … then two. A month. No bronze Skeeter appeared one morning. No plaque. Nothing. Just that square of concrete poured apparently by hand in the dark of night either by aliens or South End tricksters. I mowed around it and pondered its meaning the way astronauts in 2001: A Space Odyssey pondered the Black Obelisk, knowing only that some intelligence had brought it, who knows whether for good or ill. All I knew was I wouldn’t be moving it, not a half ton of concrete.

After a few weeks I stopped paying attention to my mystery square, stopped guessing what its Maker intended, stopped seeing it at all … until a few days ago when the phone booth showed up, one of those rectangular booths from a time just before the cellphone made public telephones obsolete. Clark Kent would have to change in a McDonalds bathroom hereafter and every citizen, no matter how impoverished, would need to purchase a personal phone and a plan.

And yet … here was the Last Phone Booth on the South End, possibly in America, maybe even the world!! In my park. Under my care. Which, considering I do not own a cellphone, is Totally Apropos, as if the Gods of Wire Transmission or the Ghost of Alexander Graham Bell had anointed me Keeper of the Dial Tone.

Of course it arrived without a working phone, just a payphone with no incoming line off the street. Most gifts, if you think about it, come with strings attached. Mine did, but not the useful ones. Nevertheless, I’m the Ranger, an American Dr. Who with his very own nonfunctioning Tardis. I would find a Way, count on it, because that’s my job. The concrete square was, it turns out, my new purpose, better, I suspect, than winning the Lottery where the end of my days would be filled with South Enders begging for loans. 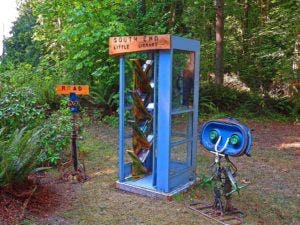 I guess the Facebook zombies actually stop to eat. And it could even be argued that this social media is really social. A new social, I guess, no face to face necessary, just tweets and instagrams, nothing too up-close and personal. Tim Cook, the new warden at Apple, recently declared sitting at a computer terminal to be the new cancer. Thanks, Tim, for asking the troops to stand up. How about asking them to go outdoors and exercise? Or quit their carcinogenic jobs? Or get a life?

We’re rewiring our brains, no doubt about it. B.F. Skinner and the Pavlovian dogs, peck a button and the bait, I mean the reward, comes tumbling out, time after time, predictable as an IV of opiods. Try this experiment if you’re a doubter: put away your cellphone, turn off your computer, unplug the TV and peripherals and devices, see how long you can last before the shakes and the fevers start. I bet about an hour. We might be missing important stuff. You know, Trump, Beyonce, Oprah, the photo from a friend you rarely see, Trump, the latest movie star scandal, did I mention Trump? If I did, let me add Trump again anyway.

This is our reality now. We even made a reality show huckster our Leader. We get what we deserve, the old adage goes in regard to a country and its rulers. Times certainly change and now they’re changing in hyper-drive. If anyone thinks, myself included, that there will be a cure for this disorder, we got another think coming. In about two tweets.